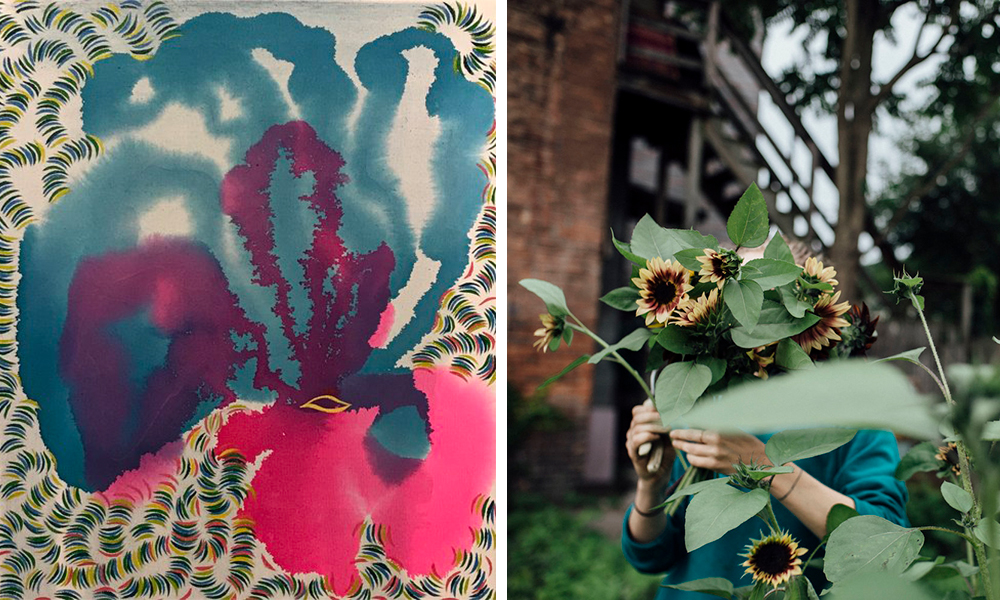 Opening Friday, May 11, 5-7pm: Bushel is pleased to present ‘Deep Library,’ an exhibition of new works by painter and ceramicist Saira McLaren and gardener, writer, and floral designer Colie Collen.  The exhibition will remain on view until Sunday, June 24.

In this two-person show timed for the cusp of the growing season, flowers are both subject matter and matter itself. Their surface beauty is neither denied nor fetishised, allowing their full drama—’suspicious, indecent, yet nastily noble,’ in Baudelaire adapter Shuzo Oshimi’s words—to unfold.

In Saira McLaren‘s paintings, flowers are portals to a psychic, sometimes ominous wilderness, where fantasy, anxiety, and dreams can flourish. In her explorations of this unstable landscape, distinctions between abstraction and figure dissolve beneath attention to light, movement, pattern, tone, and line. In Colie Collen‘s installation, once-live plant matter cohabits with the newly rooted—houseplant cuttings gathered from neighbors and friends, each with a story—marking the effects of time, the care of attention, and the promise of decay that resides in all living things. Here, now, flowers are everywhere, as they are everywhere in paintings and photography, in gardens and on tables in homes: Collen names them a deep library. We tame them, arrange them, prefer them ‘natural’ to ‘fake.’ But that too is a fantasy: in McLaren’s words, ‘what counts as wild and what is natural is a human construct. We decide where the wilderness starts and where it ends.’

At the opening reception, from 5-7 on May 11, Collen will also show a degenerative sculpture made with flowers and ice.

Saira McLaren was raised in Toronto and lives and works in Brooklyn and the Catskills. She has recently exhibited at Sargent’s Daughters, New York, NY, Essex Flowers, New York, NY and NADA New York 2014. McLaren has has been featured in publications such as ARTFORUM, The New York Times, New York Magazine, Art Observed and ArtSlant.

After years of apprenticing at vegetable farms on the West and East coasts, Colie Collen began growing flowers for her own design business in 2013, buying a foreclosed lot from the city of Troy, NY. That business, Flower Scout, specializes in wild, seasonal arrangements and is inspired and influenced by an interest in connection, in language, and in the expression of tenderness and impermanence that flowers provide.

Open for viewing during Open Hours and events (see the Calendar for event listings), and by appointment.
Contact: info@bushelcollective.org