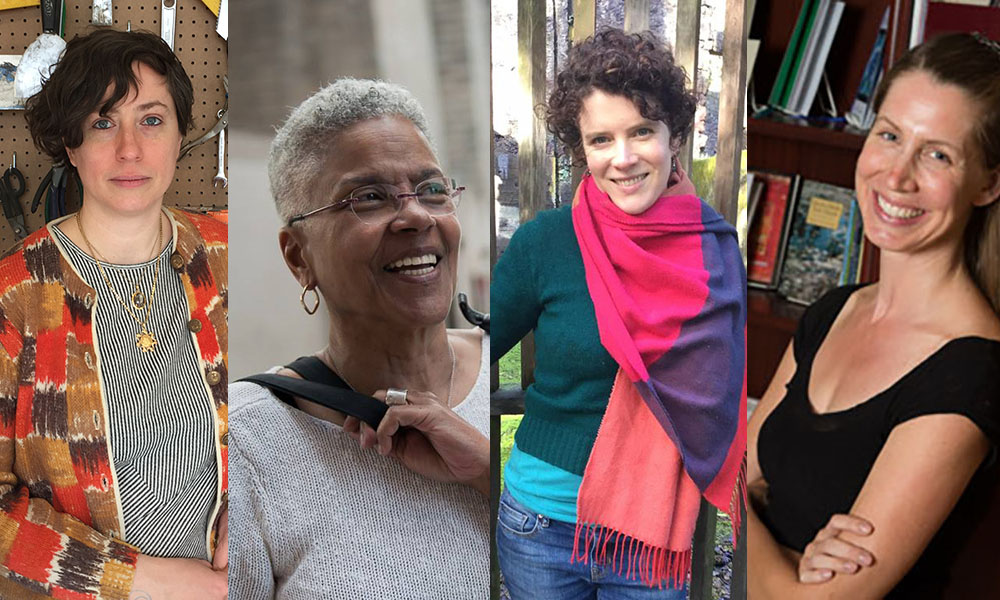 Please join us on Friday, May 27th at 7:00pm for a poetry reading featuring writers from Delaware County and New York City. Followed by a reception.

Emily Brandt is the author of three chapbooks: Sleeptalk or Not At All (Horse Less Press),ManWorld (dancing girl press) and Behind Teeth (Recreation League). Her poems have appeared in The Offing, Apogee, Sink Review, The Atlas Review, and other journals. She earned her MFA from New York University where she facilitated the Veterans Writing Workshop. She’s been in residence at Saltonstall Arts Colony (NY) and Elsewhere (NC), and is an Emerging Writers Fellow at Poets House. Emily is a co-founding editor of No, Dear, Web Acquisitions Editor for VIDA, and a contributing writer for Weird Sister. She lives and teaches in Brooklyn.

Cheryl Clarke is the author of four books of poetry, Narratives: poems in the tradition of black women  (1982; digitized, 2014); Living as a Lesbian (1986; reprinted by Sinister Wisdom Press, 2014), Humid Pitch (1989), Experimental Love (1993), the critical study, After Mecca: Women Poets and the Black Arts Movement (2005), and her collected works The Days of Good Looks: Prose and Poetry 1980-2005 (2006).  Her writing has appeared in numerous publications since 1979, most recently in The Bone Bouquet Journal, Summer 2015 and 2016 Argos Calendar. Her fifth book of poetry, By My Precise Haircut, will be published this spring by The Word Works Books of Washington D.C. Her manuscript was one of two chosen for the 2015 Hilary Tham Capitol Collection Competition.

Iris Cushing is a poet and editor living in Queens. She is the author of Wyoming (Furniture Press Books, 2013). She is a founding editor for Argos Books, and has recently edited Bobbie Louise Hawkins: The Sounding Word and Judy Grahn: Selections from Blood, Bread and Roses for Lost & Found: The CUNY Poetics Document Initiative Series VI. Iris studies in the Ph.D. program in English at the CUNY Graduate Center and teaches at Queens College.

Elizabeth Zuba is the author of two books of poetry, Decoherent The Wing’ed (SplitLevel Texts, 2016) and May Double as a Whistle (Song Cave Press, 2015). She is the editor of Not Nothing: Selected Writings by Ray Johnson 1954-1994 (Siglio Press, 2014); translator and co-editor of Marcel Broodthaers: My Ogre Book Shadow Theater Midnight (Siglio Press, 2015) and La Familia Americana, an anthology of contemporary American poetry (Cosmopoética: Madrid, 2010). Elizabeth has recently translated Marcel Broodthaers’s Pense-Bête (Granary Books, 2016) and 10,000 Francs Reward (Printed Matter, 2016), as well as numeroustexts for the current retrospective of his work at the Museum of Modern Art (February-May 2016) including his 1975 book En lisant la Lorelei. Some of Elizabeth’s critical work has appeared in Bomb Magazine, Black Mountain Studies Journal, The Reanimation Library’s Word Processor, and Ray Johnson’s Art World (Feigen Gallery, 2014).