[Exhibition] All the Way Around It 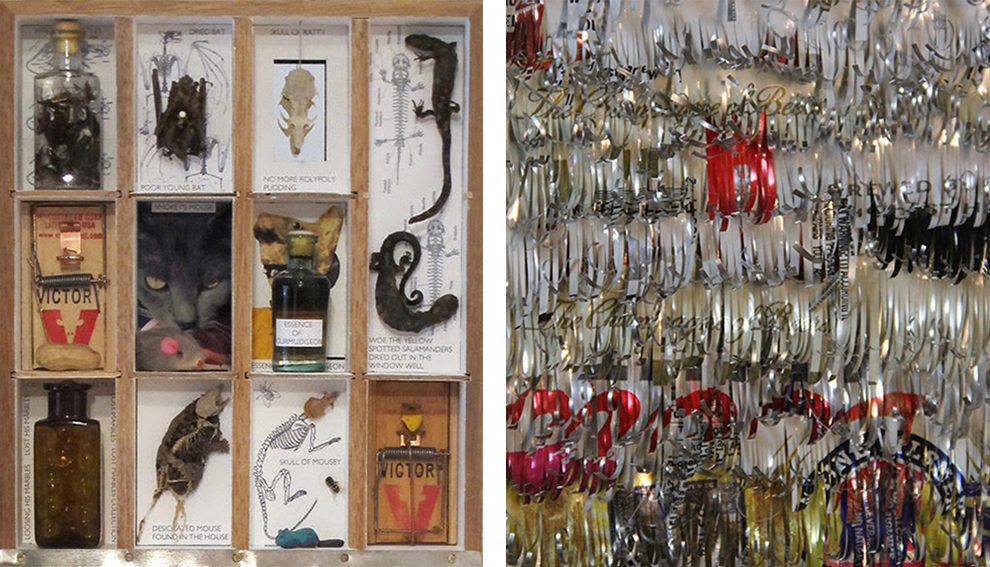 All the Way Around It
David Wilson, Christina Hunt Wood, and Guillotine

The exhibition closes with a brunchtime reception and gallery talk by David Wilson and Christina Hunt Wood on Sunday, August 18, 2019, 11:30AM–1:00PM. All are welcome!

*Selected works from this exhibition are now available for purchase online here.

BUSHEL is pleased to present All the Way Around It, an exhibition bringing together two visual artists and a publisher, all three working at the intersections of autobiography, mythography, archive, and resistance. David Wilson will show examples of his “box art,” large-scale Joseph Cornell– and H.C. Westermann–influenced mechanized sculptures that engage found, saved, and repurposed artifacts in cabinet-style housings invoking dioramas and puppet theater. Constructed between the early 1970s and the spring of 2019, these idiosyncratic and provocative pieces take their content from sites of often unavoidable conflict—between nations, creatures and their environments, belief systems, parts of the self. Christina Hunt Wood uses photography, sculpture, and video to examine and articulate aspects of her experience as an African-American living in the rural, predominantly white community where she was raised. Her “maps” employ gathered, geographically sorted, and manipulated beer-can litter to mark illegible but clear differences between individual roads in her environment; other works are inspired by her ongoing research into the mundane, sometimes racially charged actions of local people past and present that, in Hunt’s words, can “thwart opportunity for social, economic, and environmental progress in the name of perceived tradition or patriotism.” The authors published by Guillotine are, each in their own way, finding forms and language to remind us that essays are actions and everything’s at stake; produced by hand and distributed with intentionality and care, these chapbooks and broadsides are, like Wilson’s and Wood’s work, radical and frank, making them both an invitation and a challenge.

David Wilson is a glass artist, designer, and sculptor living in central New York State since 1978.  Born in England, he graduated from art school with a National Diploma in Design (NDD) in 1961. Since establishing himself in the US he has created numerous large-scale glass works for religious buildings, airports, medical centers, corporate and public buildings, and private residences. He has been constructing box art, often on the themes of history, war, eroticism, and political rage, since the early 1970s and has shown work previously at Gallery 53 in Cooperstown, NY. This is his first show representing the span of his sculpture practice. He lives in South New Berlin, NY.

Christina Hunt Wood is a video artist and photographer living in the Catskill Mountains of New York State. She received her MFA from Lesley University College of Art and Design and BA from Hobart and William Smith Colleges. She recently had a solo show at CANO in Oneonta, NY. She lives in Delhi, NY.

Guillotine is an erratically published chapbook series focused on speculative fictions and radical nonfictions. They support and publish work that is explicitly queer, feminist, anti-racist, anti-colonial. Guillotine’s editor, letterpress printer, hand-binder, and “head witch” is Sarah McCarry, author of the novels All Our Pretty Songs, Dirty Wings, and About A Girl. She lives in Brooklyn, NY.

This exhibition is open for viewing Wednesdays, 10:30 am to 12:30 pm, during other Open Hours (posted weekly at bushelcollective.org), by chance, and by appointment.