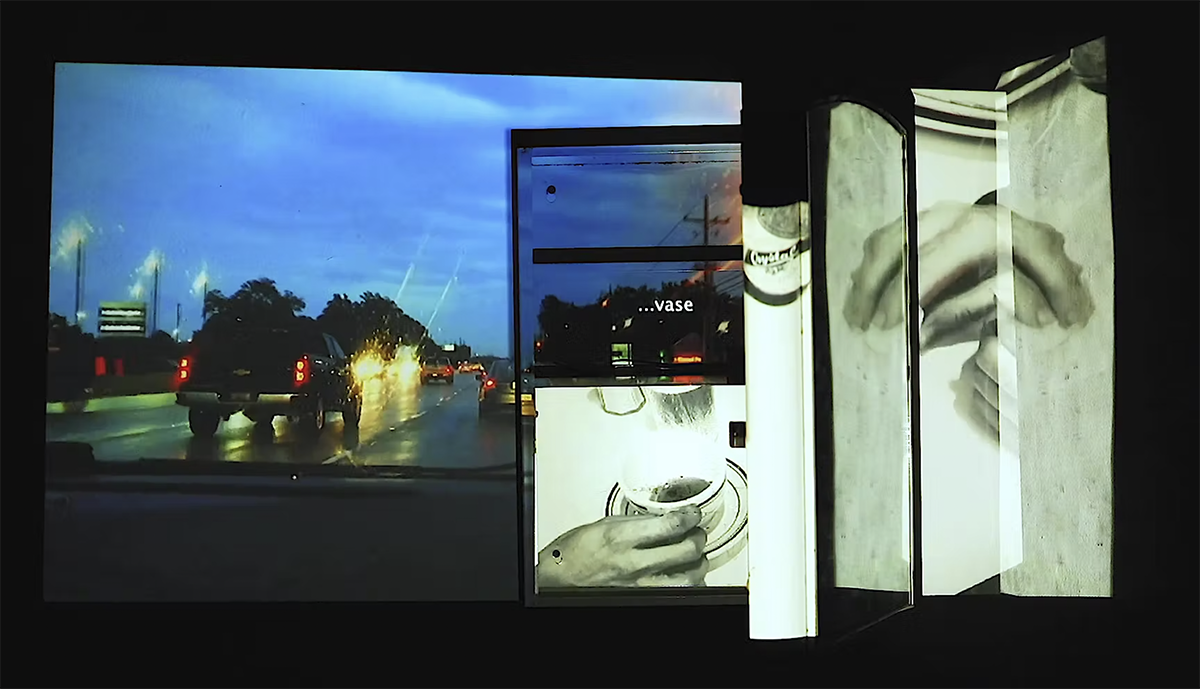 June 18 – August 14, 2022
On view during Open Hours, Bushel programs, by chance, and by appointment
(for appointments, email info@bushelcollective.org)

VOLUMES (or, things variously refusing to stay inside their containers). List your materials from the most tangible to the least. What shape do you find it the hardest to fit into? At what point do you reach for the earplugs? What’s the loudest whisper in your head? What about illusion or the imitation of illusion? If you practice, you can make this sound with your mouth. Just open the book. How did he fit in there?

For this group exhibition, six artists from New York and California do things with volume/s and with the idea of volume. They also responded to an invitation to recommend books that influenced their works, collectively adding to the volumes on Bushel’s tiny-bookstore shelves.

Mark Allen is an artist, educator and curator based in Los Angeles and the founder and executive director of Machine Project. Together with Machine, Allen produced over 1500 events, workshops and installations. He is an Associate Professor of Art at Pomona College and serves on the Board of Directors of the Andy Warhol Foundation for the Visual Arts. He received his MFA in Visual Art from the California Institute of the Arts.

Zachary Cummings was born in Baton Rouge, Louisiana. In 2011, he received undergraduate degrees in both Studio Art and Physics from Louisiana State University. He completed his MFA in Visual Art at Rutgers in 2013. He works primarily in painting. Zachary recently moved from Brooklyn to Delhi, NY where he lives with his wife and daughter. In his work, he investigates visual means of negation and the non-binary logic associated with these means. The paintings are often approached from both the front and back of the canvas. The canvas surface itself folds around internal structures, creating crevices and skewed planes. These techniques open up additional dimensions.

Jaclyn Guido grew up in Baltimore, occupying her time as an only child by making drawings, collages, maps, puppets, and fabric constructions. She frequented the Baltimore Museum of Art with her mom where she was inspired at a young age by Matisse’s cut outs, the Surrealists, and was engaged in lengthy conversations about art vs. artifact. She studied Industrial Design at RISD and acquired the process and skills to bring her three-dimensional ideas to life. She has since worked full time designing and fabricating store windows and interiors, while maintaining her fine art practice in her tiny Hamden studio. She is passionate about local fabrication, the natural world, art’s ability to express human experience, and backpacking the Catskills region.

Leonardo Madriz (b.1987, Louisiana) is an interdisciplinary artist based in Brooklyn, NewYork. He holds an MFA from Hunter College (NY, 2021) and a BFA from Louisiana State University (2010). His first solo show is forthcoming at NARS Foundation (Brooklyn, NY) in early 2023, and his installation, Letters to Home, Pt. 1, will be exhibited at CURRENTS New Media Festival (Santa Fe, NM) in June 2022. Recent group shows in New York include Shadow & Light, Longwood Gallery and Bronx Council on the Arts (2022); Lucky to Be Here, Bronx Council on the Arts (2021); Heaven, 205 Hudson Street Gallery (2021); Orphans of Painting II, Ethan Cohen KuBe (2019); and Waiting for the Garden of Eden, White Box Gallery (2019). His work has been featured by Hyperallergic and Hauser & Wirth.

Sahra Motalebi (b. 1979, Birmingham, Alabama) is an artist, vocalist, and writer. Often formatted as performance-exhibition, her work includes opera, scenographic installation, vocal composition and recordings, painting, voice-sculpture, video, and text. Her projects have been exhibited and she has performed at The Kitchen, MoMA PS1, New Museum, SculptureCenter, Swiss Institute. Motalebi participated in the 79th Whitney Biennial in 2019 and was a Visual Arts Fellow at Harvard’s Radcliffe Institute 2020-2021. She has been the artist in residence at NYU’s 80WSE Gallery, Chinati Foundation, Villa Empain, Watermill Center, and Yaddo. She has collaborated with Sophia Al-Maria, Darren Bader, Sibyl Kempson, Rashaun Mitchell and Silas Reiner, Asad Raza, Will Rawls, and worked with the Yves Klein Archives. Motalebi graduated from Sarah Lawrence College with a Bachelor of Liberal Arts. Motalebi attended the Master of Architecture program at Columbia University’s GSAPP, later withdrawing to focus on the intersections of art, architecture, and performance. She currently lives in New York.