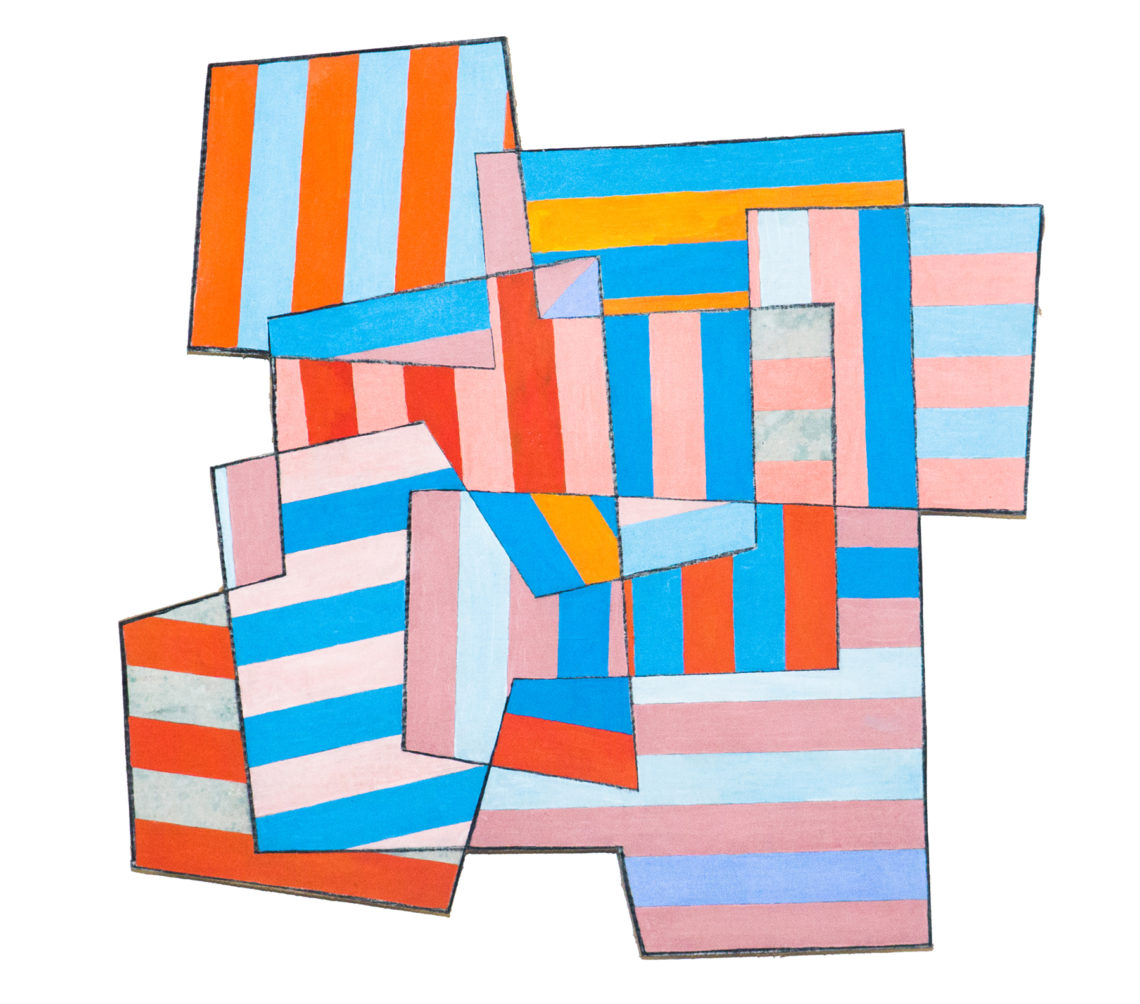 Bushel is pleased to present new work by Michael Milton. The focus of Milton’s recent paintings is expression through abstraction, or a kind of de-personalized expression the artist aims to foster by placing stark limitations on his compositional and material choices. The majority of these works are made on shaped panels—many cut from corrugated cardboard, as an extension of the drawing process—and are built from straight lines set at wildly articulate, often intersecting angles.

The use of materials that have been discarded as without value—boxes from a local paint store, newspaper clippings that build up a layered ground only occasionally revealed—is both a natural and a concerted choice for Milton, who has a history of building structures and furniture with repurposed materials. The paintings are also sized to the body (as big as a mirror you could see yourself in, or a parcel you could carry in your arms), another way to complicate assumptions about individual subjectivity: “It’s as if I am stepping away from my ‘person’ in order to uncover the core of ‘this’ person,” Milton has said. Providing the show’s title is an example of how Milton’s concerns travel into the surroundings he has chosen: In ‘Guidelines,’ colored bungee cords create landscape-sized paintings with shaped borders no scissors could cut.

Michael Milton was born in Jamaica and spent the years 1970-76 in the U.S. Navy, stationed in the Philippines, Hawaii, Philadelphia, and Long Island. Afterward, while earning his BFA at School of Visual Arts, he became a member of the C.J. Jung Institute in New York, then left for Los Angeles where he started a one-person design/build company called Ideaist. After leaving LA to complete an MFA at University of Colorado Boulder, Milton returned to New York, where he worked at the National Design Museum and taught for Studio in the School. In 1999 he relocated to Bloomville, NY, where he renovated and helps run The Turquoise Barn. His work has been shown at Daniel Maher Gallery (Los Angeles), Art Resources Transfer (NYC), Soho Biennial (NYC), and elsewhere. This is his first solo exhibition in two decades and exclusively includes work made in the last eighteen months.

Open for viewing during Open Hours and events (see the Calendar for event listings), and by appointment.
Contact: info@bushelcollective.org